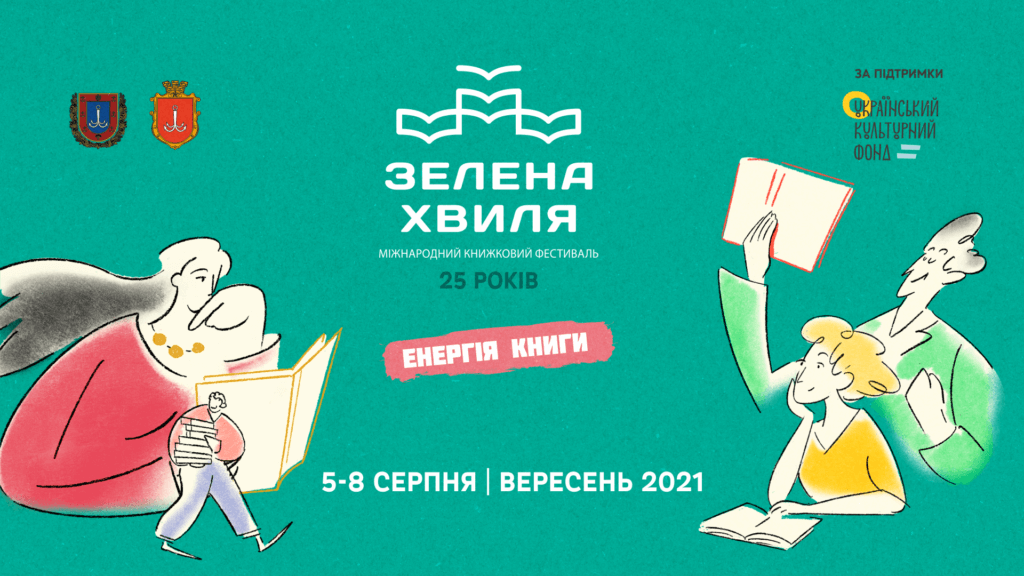 In 2021, the book festival ‘Green Wave’ took three months – from August to November, being divided into a summer and autumn seasons. The festival was jubilee this year. ‘Green Wave’ got 25 years.

More than 300 specialists from all over Ukraine became guests and participants of the festival – publishers, writers, poets, literary critics, journalists, editors, educators, musicians, actors, public officials, cultural managers, social activists.
Furthermore, there were 73 young illustrators from 18 cities and villages of Ukraine, participants of the digital picture contest iParus as part of the festival.

We all together arranged a book fair, 85 offline events for adults and children, issued 45 program videos for this time.
‘Book Energy’ – such was a lyrical focus of the festival. A special concert program and, of course, conversations and interviews were dedicated to it.

Museologists from all over Ukraine spoke of the publishing activities of their museums and present museum publications in the festival video cycle ‘Museum Booklore of Ukraine’, which was launched as early as in 2020.13 Ukrainian museums, the publishing achievements of which are just impressive, have joined in already.
The idea to create this program has come up due to our understanding of museum publications usually remaining unknown for readers – books are published in small print runs; it is mainly possible to buy them only at museums. Although the Ukrainian museums have issued a plenty of interesting, high-value, unique in the content and concepts books – albums, collections of scholarly works, publications of archive materials, education and popularisation editions, these publications do not get to book markets and bookshops.

The jubilee digital image contest iParus was held as part of the festival.
Contestants (youngsters aged 6 to 18) created illustrations to the best world literature works and were assessed by the high-profile international jury.
Based on the contest results, an album of winners, finalists and contestants was issued – 100 pages of artistic fantasy in illustrations made by children and teenagers from eighteen cities of Ukraine.

This year, ‘Green Wave’ implemented an original project with the participation of the mass audience of readers – ‘Literary Manuscript-Quote Book’ (collection in A3 format in a single copy), which was created for the 25th anniversary of the book festival during 25 days and registered as a record of Ukraine.
The Chairman of the Supervisory Board of the Ukrainian Book of Records registered a record – 409 pages, 1001 quotes.
The multilanguage collection was compiled by a big reading community: it comprised quotes from the classic and modern world literature works in Russian, Ukrainian, English, French, Spanish and Polish.
Each record was undersigned. The quotes on the pages were written by teachers, librarians, students, schoolers, medics, journalists, scientists and scholars, artists, engineers, managers, financiers, public officials, educators, programmers, economists, theatre and cinema actors, advertisers, fitness instructors, musicians, accountants, designers, psychologists, seamen, housewives, retirees.
The book was deposited to Odessa National Scientific Library for custody.

The festival hosted discussions on dramatic social issues with the participation of Ukrainian and international speakers: ‘New Measurement of the Freedom of Expression’, ‘Adult Problems of Children`s Literature’, ‘The Sword of Damocles of the Ukrainian Literature: How a Counterfeit Kills the Book Market’.

The project was implemented with the assistance of the Ukrainian Cultural Foundation.
The official support was provided by Odessa Regional Public Administration and Odessa City Council.
27 sponsors joined the project.
The organiser of the festival is Expo-Yug-Service Company.

Festival video products – discussions, readings, lections, concerts and others – are available on the website https://www.youtube.com/channel/UCM6X0iw020yRBl9HnKmD16A
Facebook of ‘Green Wave’ https://www.facebook.com/greenwaveod